SUVs SUCK in Combat: The Rebuilding of Iraq during a Raging Insurgency Kerry Kachejian 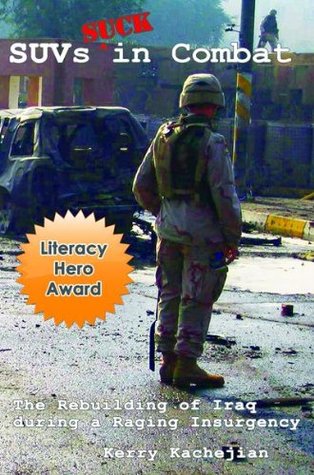 They made great personal sacrifices that few of their fellow Americans would dare endure. This book tells the rest of the inspiring story - much of which was ignored by the mainstream media as not newsworthy or reduced to mere sound bytes. In the face of imminent danger, the GRD team braved daily car bombs, rocket attacks, improvised explosive devices (IEDs) and kidnappings to rebuild thousands of projects throughout a chaotic war zone. These projects spread throughout a hostile country included schools, hospitals, police stations, oil production, electrical power and water treatment plants.

Despite the odds, GRD was able to complete its critical strategic mission, and its members were awarded the Meritorious Unit Commendation. A few of the amazing stories include: - A massive car bomb on authors first day in Baghdad that leveled a nearby hotel. - High speed Mad Max drives through the streets of Baghdad in unarmored SUVs. - The dependence on security contractors who performed with great valor while protecting American civilians. - The perilous war waged on the reconstruction mission that was largely invisible to U.S. combat forces and the American public. - The accidental rescue of an American hostage.

- Living and working in Saddams great palaces. - How a Yahoo email message was used to send an urgent plea for help. - A daring rescue mission in the Tigris River that ended in tragic loss. - The parade of Congressional Delegations that diverted precious combat resources from the war effort.

- The unbelievable (but true) story of how a Yahoo email account is used to send an urgent message to the author to PLEASE SAVE USAbout the Author:Kerry Kachejian is one of the nation’s most qualified soldiers and engineers, having served in and supported reconstruction operations in both Iraq and Afghanistan as well as relief operations during Hurricane Katrina. A 1982 graduate of the US Military Academy (West Point), Kachejian also holds a Master’s Degree in Systems Engineering from Virginia Polytechnic Institute. He is a Distinguished Graduate of the Industrial College of the Armed Forces earning a second Master’s Degree in National Resource Strategy.Kachejian has numerous military decorations, awards, and qualifications, including the Legion of Merit, the Bronze Star Medal and the Combat Action Badge.

He was presented the Bronze de Fleury Medal by the Army Engineer Association and the Reserve Award for Leadership Excellence – a national award presented annually by the Military Officers Association of America (MOAA). He is Airborne and Ranger qualified. Kachejian recently retired from the Army Reserve, holding the rank of Colonel.

He currently supports the U.S. defense industry.He has spoken at a number of major conferences and private events on topics, including the Reconstruction of Iraq and Afghanistan, the Psychology of Terrorism, Contractors on the Battlefield, and Critical Infrastructure Protection.Kerry, a native of West Chester, Pennsylvania, lives with his wife Alice and three children near Springfield, Virginia.

Comments
Comments for "SUVs SUCK in Combat: The Rebuilding of Iraq during a Raging Insurgency":