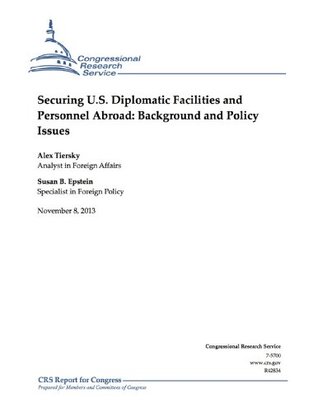 embassies in Egypt, Sudan, Tunisia, and Yemen, drew renewed attention to the challenges facing U.S. diplomats abroad, as well as to the difficulty in balancing concerns for their security against the outreach required of their mission. Congress plays a key role in shaping the response to these challenges, such as by providing resources for diplomatic security and examining security breaches overseas.The inability to provide perfect security, especially against the evident threat of mob violence, has focused particular scrutiny on the deployment of diplomatic personnel in high-threat environments.

The Department of State currently maintains a presence in locations faced with security conditions that previously would likely have led State to evacuate personnel and close the post.Under reciprocal treaty obligations, host nations are obligated to provide security for the diplomatic facilities of sending states.

However, instances in which host nations have been unable or not fully committed to fulfilling this responsibility have sometimes left U.S. facilities vulnerable, especially in extraordinary circumstances. U.S. facilities therefore employ a layered approach to security including not only the measures taken by a host country, but also additional, U.S.-coordinated measures, to include armed Diplomatic Security agents, hardened facilities, U.S.-trained and/or contracted local security guards, and sometimes U.S.

Marine Security Guard detachments.The rapid growth in the number of U.S. civilians deployed in high-risk environments of Iraq, Afghanistan, and Pakistan spurred significant investment in recent years in the Department of State’s capacity to provide security in dangerous areas through its Bureau of Diplomatic Security (DS). However, it simultaneously placed unprecedented burdens on DS’s capability to carry out this mission successfully there and in other challenging locations.Most of the funding for the protection of U.S.

missions abroad is provided through Worldwide Security Protection (WSP) within the State Department’s Diplomatic & Consular Programs (D&CP) account and through Worldwide Security Upgrades (WSU) within the Embassy Security, Construction and Maintenance (ESCM) account. The total security funding requested for FY2014 is about $3.98 billion.This report provides background information on the organization, practice, and funding of U.S. diplomatic security efforts. It also provides summary information on the September 11, 2012, attack on U.S.

facilities in Benghazi, Libya, as well as on the subsequent Accountability Review Board. More information on congressional and State Department actions in response to the Benghazi attack is available in CRS Report R43195, Securing U.S. Diplomatic Facilities and Personnel Abroad: Legislative and Executive Branch Initiatives, by Alex Tiersky.